The fish of the Pilbara and the threats to their survival have been detailed in a stunning film and comprehensive field guide by scientist Dr David Morgan, his team from Murdoch University’s Freshwater Fish Group and Fish Health Unit and ENVfusion Films. Among the native species profiled in the film and field guide are the Indian short-finned eel, freshwater sawfish, bull sharks and barramundi.

Rare and previously unfilmed species like the blind gudgeon, which lives in caves within the Cape Range National Park near Exmouth, have been captured for the documentary which is now available to view on YouTube.

The documentary, funded and supported by Rangelands Natural Resource Management (NRM) and the State NRM, was made in conjunction with ENVfusion Films over the course of several visits over a 10 month period. Dr Morgan and his team went to Karijini National Park, Millstream-Chichester National Park, the De Grey River, the Gascoyne River and the Murchison River as well as other locations. 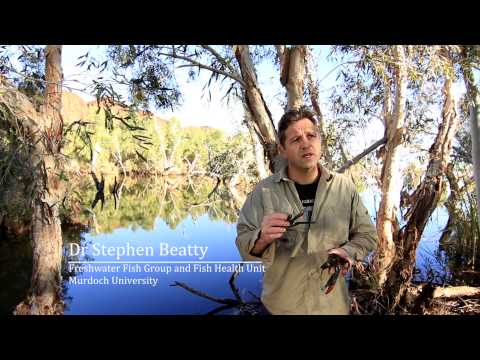 Dr Morgan said the film and field guide were designed to be as accessible as possible for the general public to raise the profile and increase the broader awareness of these species and the threats they face so they are conserved for future generations to enjoy.

“It’s a pivotal time in the Pilbara for freshwater fish because of the mineral explorations, water pressures and the expanding human population, bringing with them the threat of introduced species,” said Dr Morgan.

Caution is needed in the development of new projects in the Pilbara. Groundwater-dependent ecosystems might become compromised if the aquifers become contaminated by industrial pollution.

We hope the documentary and field guide highlights that aquatic fauna needs the water as much as the heavy industry.

Rangelands NRM Desert and Pilbara Program Manager Chris Curnow said many of the freshwater species in the Pilbara are endemic meaning this is the only place in the world they can be found.

“This is a great resource not just for schools and the general community, but also for landholders, industry and state government departments who manage these vast areas of rangelands,” Mr Curnow said.

We hope that collaborative land management on a landscape-scale will ensure these pristine habitats and the species that live in them are preserved.

The project also highlights destructive introduced species like the redclaw crayfish and the Mozambique tilapia and the harm they are doing to delicate ecosystems.

We think the redclaw crayfish were introduced around eight years ago and they can currently be found in large numbers in the Harding River System, explained Dr Stephen Beatty, also from Murdoch’s Freshwater Fish Unit.

They can reproduce in the first year of life and are tolerant to a broad range of environmental conditions. They can have a potentially devastating impact on aquatic ecosystems because they modify habitats, are predators and competitors to native species and can introduce diseases.

Once populations of redclaw have become established, eradication is almost impossible. We have to ensure they don’t spread elsewhere in the Pilbara.

Dr Morgan said the comprehensive nature of the field guide meant they needed to tap into a lot of local knowledge and people were more than happy to help.

“There are a lot of people looking forward to the documentary and the field guide, a lot of long time locals who have contributed. People filled up our cars for us, gave us maps, took us out in their aircraft – people went out of their way to help us while we were up there,” he said.

Knowledge of fish in the area is pretty slim and not at all comprehensive. We hope we are going some way to rectifying this. The end products are a synthesis of everyone’s knowledge of the area, a culmination of many scientists’ research.

The Pilbara is a harsh, very beautiful but extremely fragile environment. It is up to us to ensure these species are protected for future generations and we hope our field guide and film will help conservation efforts.

Free but limited copies of the field guide are available from Dr Morgan. Please email him for more information: d.morgan@murdoch.edu.au.

Dr Morgan is also planning to screen the documentary in person in various locations in the Pilbara in the New Year in conjunction with Rangelands NRM.

The Pilbara Fish Province extends from Dongara in the south to the De Grey River Catchment in the north, encompassing all the river systems in between that drain to the Indian Ocean.
Media contact: